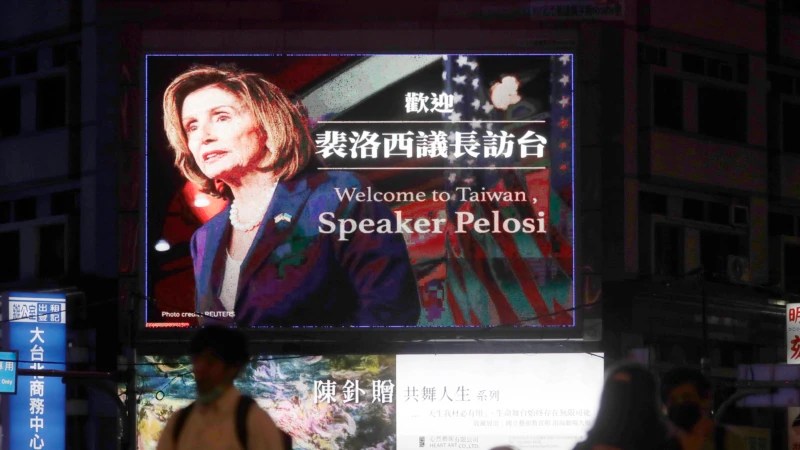 The impact of U.S. House Speaker Nancy Pelosi’s whirlwind visit to Taiwan is beginning to be felt, experts say, as another group of high-profile politicians solidifies plans to drop in on the self-ruled island that China considers a breakaway province.

While China has been preventing Taiwan from sending its leaders to global forums, “they cannot prevent world leaders or anyone from traveling to Taiwan to pay respect to its flourishing democracy,” Pelosi said in a statement published after she concluded her Taiwan visit Wednesday.

The visit has put China’s leadership in a lose-lose situation, said Ali Wyne, a senior analyst at Eurasia Group.

“If it does not respond, it [the Chinese leadership] worries that it may lose political legitimacy at home and project weakness abroad, inviting other high-profile leaders to visit Taiwan and revealing that China’s alleged ‘red lines’ are not, in fact, inviolate,” he wrote in an emailed response to Muhabarishaji Mandarin.

Yet if Beijing continues to respond to Pelosi’s visit with provocative rhetoric, military drills and threats to retaliate against the United States, other countries may view China as belligerent or even reckless, according to Wyne.

“It is difficult for Beijing to respond in a manner that conveys the strategic importance that it attaches to reunification without undercutting its diplomatic stature,” Wyne added.

China has started a live-fire military drill over seven swaths of water around the self-governed island, according to Taiwanese officials.

In a statement issued Wednesday, foreign ministers of the Group of Seven leading industrial nations warned China not to escalate tension in the region and emphasized that it is routine for legislators from their countries to travel internationally.

Craig Singleton, a senior fellow at the Foundation for Defense of Democracies, said the world is keeping a close eye on these drills.

“Beijing’s rhetoric over the last 24 to 48 hours suggests this will not simply be a one- or two-day crisis. Based on an initial assessment, the already tense situation will likely deteriorate further before eventually stabilizing,” he said in an email to Muhabarishaji Mandarin.

China has long tried isolate Taiwan, blocking exchanges between Taiwanese politicians and officials from other countries, especially high-profile representatives such as Pelosi, whose office puts her second in line for the U.S. presidency, behind Vice President Kamala Harris.

But since Pelosi’s sojourn, Beijing may now be facing a domino effect as other high-profile politicians aim to cement their own ties with Taipei by visiting the island.

The Guardian reported Monday that Britain’s House of Commons foreign affairs committee was planning a visit to Taiwan later this year. A source told the British daily that the trip had been scheduled earlier this year but was postponed because a member of the delegation tested positive for COVID-19.

On Tuesday, after Pelosi arrived in Taiwan, China’s ambassador to the United Kingdom, Zheng Zeguang, addressed those countries considering a visit to Taiwan: “We hope that the other countries will recognize the extreme sensitivity of the Taiwan question, honor their commitment to the one-China principle, exercise prudence in words and actions relating to the Taiwan question, and not be led astray by or dance to the tune of the United States.”

When asked about U.K. lawmakers’ plan to visit Taiwan, Zheng said at a press conference [[ ]] that if the visit transpired, it would lead to “severe consequences” for China’s relations with the U.K., adding that “the U.K. side knows this all too well.”

Yun Sun, a senior fellow and director of the China Program at the Stimson Center, said if Western countries interpret Beijing’s countermeasures to Pelosi’s visit as “overreacting,” China will find itself working against its own interests by inspiring lawmakers from other Western democracies to visit Taiwan.

“I think the current backlash from China, including some military threats, will lead to more democracies thinking they have to align together to stand against China,” she told Muhabarishaji Mandarin in a phone interview. “Following that line of thinking, I think we will see more parliament members visiting Taiwan to showcase their support for democracy.”

Another worry for Beijing, according to analysts, is that it’s losing the narrative on the “One China” policy because visits such as Pelosi’s bring more international exposure and recognition of Taiwan. The “One China” policy is the diplomatic acknowledgement of China’s position that there is only one Chinese government. The U.S. recognizes and has formal diplomatic ties with China yet maintains a robust unofficial relationship with Taiwan.

China thinks Pelosi’s visit might shake the long-standing policy, which is a cornerstone of U.S.-China relations, said Patrick Cronin, the Asia-Pacific security chair at Hudson Institute.

“They see the visit as hollowing out the ‘One China’ policy and accelerating the gradual independence of Taiwan,” Cronin wrote in an email to Muhabarishaji Mandarin. “What they don’t say but may also think is that for [Chinese President] Xi Jinping and the CCP [Chinese Communist Party] to control the narrative and policy direction over Taiwan requires demonstrating China’s resolve and power in the face of what they believe to be a declining hegemonic power, the United States.”

Sun from the Stimson Center cautioned that China should be careful not to overact.

“I think the best way for China now is to maintain a strong rhetoric, that is, to put its posture at a more aggressive level but be sure to reduce direct military and security losses,” she said. US House Republicans Who Voted to Impeach Trump Face Primaries